So you want to know who I am, don't you?

I am one who likes the stories in every shape: written in the books, sung by artists like Dalla, De André and De Gregori, performed in a theater by masters like Eduardo De Filippo, depicted in a movie.

Yes, I'm a bit of the old school. I was born in 1983 in Trani, a beautiful Apulian town where I grew up, I live and write.

Speaking of movies, I must quote the phrase of "Along came a spider" (based on the homonymous book by James Patterson) that better conveys how I see things: "you do what you are". 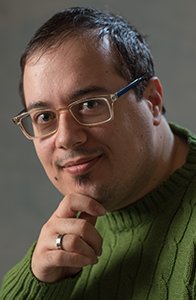 I write and I want to make of writing my craft.

I think that writer and reader get lost in a story to explore a world in which they believe with all their imagination and this makes it real. That world is a part of us and we cannot live without it.

When I speak about me, I say that I wanted a typewriter already when I was seven years old and at age of ten I received a marvelous green typewriter Olivetti Lettera 32 as a gift from my parents.

To be precise, the passion for writing is innate. I remember when I played at home with my brothers and a cousin, staging stories in front of a camcorder. Or in farmland, my imagination run weaving plots that would involve the unware relatives come for a party. I remember that, aside, I was talking about mysteries in front of the lens like a young Alfred Hitchcock.

I have always been fond of London and above all the English language. Besides Sir Hitchcock, I admire Sir Arthur Conan Doyle, the father of Sherlock Holmes, and Agatha Christie for their detective stories.

Detective stories and thrillers have always intrigued me, as well as science, informatics and everything can tickle the mind. So fantasy, humour and action too.

In fact, some of the movies I like are "Matrix", "Lethal Weapon", "Mission Impossible" and "Jason Bourne", just to say a few. Among tv series, "CSI", "Fringe" and "Castle". Yes, being a writer detective would be super, but giving life to imaginary detectives is even more amazing.

This web site uses the cookies to provide you with some services. Click here to know more or change your preferences.
If you close this banner or keep browsing in the site in any way, you authorize the use of cookies. Close